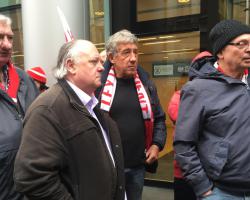 Bosses at an event management firm say they are owed about ÃÂ£18 000.

Tax officials said a debt owed to them had been paid.

A lawyer representing Orient said ÃÂ£1million was due to be injected into the club soon.

The judge, Registrar Nicholas Briggs, had analysed the case at a Bankruptcy and Companies Court hearing in London.

"I would like it to go to somebody who can actually take care of it and look after it properly.

"We've got a great history."