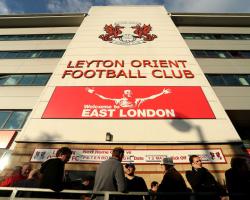 Staff at the League Two club, who will drop out of the Football League at the end of the season, were not paid last month and have not been able to contact controversial Italian owner Francesco Becchetti.

Orient survived a winding-up order last month over unpaid taxes, reported to be ÃÂ£250,000, with Becchetti given until June 12 by the High Court to pay off debts or sell up

It read: "The EFL remains exceptionally concerned about the current situation at Leyton Orient

This is shared by the EFL executive, as we are similarly seeking answers to a number of important questions from the directors of the club

Silence is not an acceptable response.

At this meeting, we received confirmation that funds would be made available to dismiss the winding up petition and fund the club going forward.

No response has been received to date.

"The EFL executive are continuing to work with the club's dedicated staff to ensure that appropriate arrangements are in place for Saturday's final home game of the season and we would like to place on record our thanks for those that are making this possible, including the local safety advisory group

Additionally, a meeting has been arranged with Leyton Orient Fans' Trust, to try and keep those parties with the club's best interests at heart, united.

"While Leyton Orient may have been relegated to the National League, the EFL will continue to do everything it can to ensure that the future of the club is secured."

The statement said: "There has been significant comment in recent days about the EFL's owners' & directors' test in the context of the ownership of Leyton Orient

It is important that supporters understand that the test governs the eligibility of who is able to own a club; it does not also ensure that those individuals have the capability to manage it properly

"The role of the EFL is one of a competition organiser and the management of clubs is a matter for their directors, as long as their conduct is not in breach of any of our regulations

There are any number of actions the EFL might wish to take, but it can only ever act in accordance with those regulations."

Earlier on Monday, Barry Hearn, who spent 19 years as O's chairman, quit as the club's honorary life president in protest at the failure to pay staff